Jan graduated from high school in Hertfordshire, England, from University at Troy State in Alabama, and from law school at the University of Puerto Rico.

“Jan P. Johnson Burt, an officer and a gentleman, is a respected professional and outstanding individual. He served as Chapter 13 trustee for the District of Puerto Rico from 1989 to 1999. His legacy, characterized by a thrive for excellence and a commitment to the core value of integrity, is remembered by all bankruptcy practitioners in Puerto Rico.

I served in the Puerto Rico Air National Guard directly under the command of BG Jan P. Johnson. Jan P, as many of us called him on a personal basis, served as Chapter 13 Trustee during my tenure as Chief Judge. The mutual respect in our relationship was instrumental in achieving our individual goals.

I can truly state that it was both a privilege and a pleasure to have worked for and with Jan P. Johnson Burt in serving our people by safeguarding the security of our nation and promoting an effective and efficient bankruptcy process in Puerto Rico.

Jan has been an active national speaker on consumer bankruptcy issues, has served as president of the NACTT, The NACTT Academy, and the Sacramento Valley Bankruptcy Forum. Over the years, he has served on many many committees including the NACTT Liaison Committee and worked tirelessly to promote continued legal education.

“When Jan hired me over 9 years ago, I had no idea what to expect in being his Staff Attorney but it has turned into the best career I could have asked for. I knew that Jan was a great Trustee and I was excited to work with him, but what I didn’t know was also what an all-around great guy he is.

I have had the privilege of getting to know him and his family over the years and there couldn’t be a more kind, generous man. He has been a boss, mentor, and friend and while I am so happy that he is getting to retire, travel and enjoy more time with his grandson, I will miss him. And I believe that sentiment rings true throughout our Northern California Bankruptcy community.

In addition to his work with the NACTT, The Academy and the Federal Bar Association, Jan has been instrumental in planning local educational programs, participating on the Clerk’s committee, participating on the Local Rules committee, maintaining our local Chapter 13 email listserv, and maintaining an overall comradery with all of our Attorneys and Judges. Our local practice will not be the same without him and he will truly be missed!” Kristen A. Koo, Staff Attorney

A consummate professional, Jan also has a personal life. A good friend recounts:

“Some people know, but many do not, that away from the bankruptcy world, Jan Johnson is an avid active sports enthusiast. Over the years, I have shared several hikes and ski days with Jan. One year we hiked up the highest peak on the rim of the Lake Tahoe Basin, Mt. Rose, which is 10,776 feet tall. On a clear day one can see a long stretch of the California coast range mountains and in the opposite direction, half way across the state of Nevada.

We also had a few ski days at Heavenly Valley on the south end of the lake. On one ski trip, we suffered storm conditions all up and down the mountain. The wind was blowing the snow and ice sideways into our faces and the ski lifts were swinging wildly from side to side but Jan was tough and ever cheerful. However, I must admit that is possible that we spent more time in a ski hut eating chili and drinking beer than actually skiing.

Jan is also a martial arts enthusiast. After one match, he showed up at Court with a spectacular shiner. Allegedly he still won the match. The judge did not comment but he definitely noticed it.

I also have it on good authority that Jan may have had Tango dancing lessons with his beautiful spouse. That would be a sight!” Eric J. Schwab, Esq., Sacramento, CA. 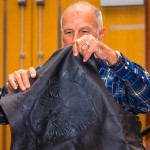 As if this isn’t enough interests for one person, Jan is also a motorcycle enthusiasts – a biker dude! Not Harley. Not Honda. Ducati. Of course, Ducati, a high-performance, premium brand! At the NACTT conference in Indianapolis in July, as a toke of our appreciation, The Academy presented Jan with a leather biker vest which he loved – although it is not so clear as to whether or not his wife did!

We complete this tribute to Jan with a ‘love’ letter from a long time practitioner in Puerto Rico:

He was special to the Puerto Rico bar, both creditor and debtor bar and to our judges. Everyone respected him, and still remember him with fondness and great respect whenever he is mentioned in conversation among us.

If it is possible to ‘grieve’ someone who is alive and well, Puerto Rico grieved his departure when he left (I jokingly say, when he ‘abandoned’ us) for Sacramento. We continue to ‘grieve’ Jan not being our Trustee any longer. I cannot remember how many years we had the immense privilege to have him as our Chapter 13 Trustee, but it was too short.

I met him when he was but a ‘school boy’, practically when he commenced working as the only staff attorney with Robert Griswold (also an excellent Trustee, may he RIP) recently out of law school. Without being officially employed back then, he paid his own trip to an excellent NACTT Conference when Griswold recruited him, I believe, from the National Guard. I do not remember which of the many NACTT conferences he attended as an unofficial recruit with us, but the group that traveled to the NACTT conference that year was able to share with him and get to know him quickly from the start. From the moment we met, there were ‘sparks’ for this beautiful person. I grew to respect him and he was always there and receptive to all attorneys, while assisting Griswold, and later as the Chapter 13 Trustee. I do not know of anyone that ever expressed themselves with other than great respect for him. His practicality and the fluidity of the confirmation process is only a fond memory now days, always recommending the Plans and cases for confirmation expeditiously.

Jan P., as we always refer to him, is an outstanding father, husband, colleague and is a constant witness to his faith, for the glory of God and country always!

Did I mention I dearly love this man, respect him, and wish him continued blessings in his walk- in life, especially in retirement.” Lyssette Morales, Esq., Caguas, Puerto Rico.