Print Page
« Post-Petition Causes of Action, Inheritances and Windfalls Are Property of the Estate and Must Be Reported to the Trustee – Part 4 of 5
Ordinary Heroes Deliver Second Chances with Bankruptcy » 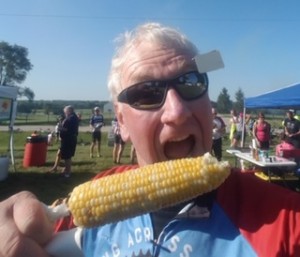 I just got back from RAGBRAI, which is a bicycle ride across Iowa. This year, it was 468 miles, with lots and lots of hills. (Biking Across Kansas was over 500 miles this year.) Such beautiful country. Estimates vary on actual number of riders, but anywhere from 16,000 to 20,000. Iowa and Kansas share a lot . . . They are different, yet alike. Most of it has to do with the people, I think.

Anyhow, I stop and visit with folks a lot. (Surprise…) I had an encounter this year that I found meaningful. It greatly reminded me of my days of representing farmers in 12s and 11s.

On RAGBRAI. Stopped outside of some little town to buy corn being roasted in husks by an old guy at the side of the road right behind his covered 5 x 12 trailer and ’04 Mountaineer. 50 cents an ear, (you husk it) dollar for gatorade or water. Just doing it to be helpful.

He offered me a chair in the shade in one of the half dozen mismatched lawn chairs. I gladly took him up on the offer.

His name was Jim. We hit it right off. Slightly built fellow, with those hard muscled popped vein forearms and fingers the size of quarters you often see on old farmers. Had just had his teeth pulled and was waiting on his “chompers.” He missed eating corn on the cob.

He had farmed 700 acres most of his life. The land had been in his family since maybe the land grant days. None of his kids wanted it and he was too old to farm it so he sold it and moved in town. He thought he came out ok on the deal. Never thought he would move into town, but he had a nice place and was happy there.

He had raised a few cattle and hogs…planted row crops. He loved being a farmer and the farm life style. Had a crawler loader and did some excavation work on the side, at one time. Sold the JD for a good price. Worked for Cargill in recent years. Hard to make money farming, even with no debt, he noted.

Amish usually bought the good ground when it came up for sale. He wasn’t sure where they got their money. He laughed when I said not having a $500,000 combine might be a good place to start for an explanation. We talked about being on wheat harvest and what it must be like to run a combine with a 42 foot floating header instead of a Baldwin Gleaner with a 14 foot header.

Proud of his son, who had a generic BA degree and is now a construction manager in Colorado Springs. Too many people back there.

Never mentioned a wife. I didn’t ask. Some things you just know don’t need to be part of the discussion.

I told him I was from Kansas. Long haul through there, he said. I never told him what I did or anything about me. He had a story to tell and I listened; guided his story a little.

Later in the week I talked to a guy who said his daughter had tattooed on her forearm “Everyone has a story.” Yup…

Back on my bike, 30 minutes later than planned. But then I didn’t plan on Jim. And I am glad I didn’t miss him. Most of the riders did.

It was their loss…

A part of this, upon reflection, made me stop for a moment and think about how we, as trustees, interact with debtors. They all have stories. And, for the most part, they are just case numbers to us.

I went into my state wide rides this year with more than my usual iconoclastic view of life, complete with curmudgeon face. I came back from Iowa with a little softer view.

Thanks to all for reading my little story. I hope it made all pause for just a moment and think about the other guy….and his story…. 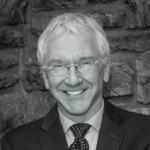 Jan Hamilton has been the Chapter 13 Trustee in Topeka, Kansas since 1998. He is a Fellow in the American College of Bankruptcy. Jan was counsel of record in the landmark bankruptcy case of Hamilton v. Lanning, which Jan appealed to the United States Supreme Court. He personally argued the case. He and his staff attorney, Teresa Arnold wrote all the briefs. He was the first Chapter 13 Trustee to convince the SCOTUS to take up a Chapter 13 matter. Jan has been a frequent presenter, and author, on various facets of bankruptcy and related areas for the last several decades. In that regard, he was awarded the Kansas 2015 Robert Gernon award for outstanding service to continuing legal education in Kansas. Jan is a past at large member of the National Association of the Chapter 13 Board of Directors, and is a current member of both the Due Process Committee and the Outreach Committee of the NACTT.

Cancel
« Post-Petition Causes of Action, Inheritances and Windfalls Are Property of the Estate and Must Be Reported to the Trustee – Part 4 of 5
Ordinary Heroes Deliver Second Chances with Bankruptcy »