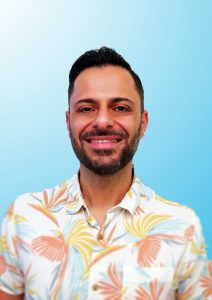 One of our very newest trustees is very familiar to many of us. After serving ten years as Chief of Staff (a/k/a Staff Attorney) to Martha Bronitsky, on August 1, 2021, Nima Ghazvini was appointed Chapter 13 Standing Trustee for the Districts of Hawaii, Guam, and Northern Mariana Islands.

What you may not know is that Ghazvini was born in Iran and in 1991, at the age of ten, moved with his family to Southern California.

He studied Political Science at the University of California at Berkeley and graduated in 2003. He thought he was headed into politics but changed direction after an internship on Capitol Hill. He graduated from Southwestern Law School in 2007 and took a position in a real estate law firm where he later dabbled in criminal defense work.

Try as he might, Ghazvini was not able to find satisfaction in his work until he began volunteering at bankruptcy and foreclosure clinics at the height of the Great Recession. Thereafter, he became very involved pro bono with Public Counsel.

Seeing how much Ghazvini loved consumer bankruptcy, his good friend, Bernard Kornberg, recommended he apply for a staff attorney position at the office of Martha Brontisky, a Chapter 13 Standing Trustee for the Northern District of California. A couple of weeks later he found himself packing his car and relocating 400 miles up the coast to Oakland, California.

Ghazvini is very grateful to the mentorship of Trustee Brontisky. After a wonderful ten years in her office, he was appointed as a Chapter 13 Trustee.

His office philosophy is one garnered from his many years of previous professional experience: Collaborate and Communicate Consistently.

As a stress reliever, Ghazvini loves fitness. In Oakland he depended on his much-loved Peloton. Sadly, he had to say goodbye to it as the shipping was too expensive. Once somewhat settled in Hawaii he joined F45 which is a gym but a bit on “steroids.” He reports that he absolutely loves it, despite having to work out wearing a mask.

Ghazvini and his future husband love to travel. However, since he can’t travel 365 days a year, he loves to spend leisure time learning about new countries and all the new places to which he wants to travel. It is not lost on him that his new home base is in the middle of the Pacific Ocean. With that in mind, East Asia is at the top of his “new places to visit” list. While traveling he loves to get lost in museums – all sorts of museums – art, natural history, etc. And it’s not just the exhibits; he loves the museums cafes and gift shops too!

Along with reading about and researching new places to visit, he loves reading non-fiction particularly 18-20th century world history and politics. He welcomes recommendations! Ghazvini has very well-rounded interests. When taking a break from non-fiction, he enjoys novels such as The Nickel Boys by Colson Whitehead, The Sympathizer by Viet Thanh Nguyen, and The Dutch House by Ann Patchett. He does, sometimes, allow himself the luxury of enjoyment from a screen – he has watched Last of the Mohicans over a 100 times!