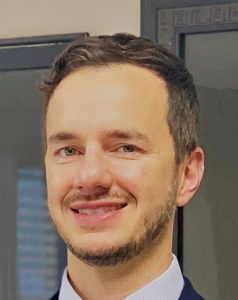 Jack N. Zaharopoulos was appointed as the Chapter 13 Standing Trustee for the Middle District of Pennsylvania on May 1, 2021. He succeeded Charles DeHart after his retirement.

After graduating from Marquette Law School in Milwaukee in 2002, Zaharopoulos worked at a general practice firm, doing debtor and creditor bankruptcy work, family law, and even some criminal cases. After gaining vast experience in general practice, he found that he enjoyed the bankruptcy work and became a staff attorney for Chapter 13 Trustee Mary Grossman in Milwaukee. Zaharopoulos states that he was fortunate to have Rebecca Garcia (currently a Chapter 13 Standing Trustee for the Eastern District of Wisconsin) as a fellow staff attorney for the nine years he served the Grossman trusteeship. He then changed career ‘gears’ and in 2014 moved to Chicago to work at a creditors’ rights firm. He knew he wanted to be a Chapter 13 Trustee at some point, so he made this move to gain needed administrative experience – and, hey, Milwaukee to Chicago is probably going to enhance your social life, right?

In a recent interview published in the NACTT Quarterly, Zaharopoulos was asked, “Why did you want to become a Trustee?” Zaharopoulos responded, “I like the work; it’s important, you are helping people, and you’re assisting debtors in completing their plans. I also like the people who work in Chapter 13. Most of them are great people to work with.”

Case in point, Zaharopoulos stated that the Harrisburg bar has been very welcoming and easy to work with. He further stated that Chuck DeHart’s staff is really knowledgeable and they take their jobs very seriously. Zaharopoulos was able to join the DeHart office as a consultant a few weeks before his appointment was effective. That allowed him to get acclimated and to observe DeHart and his office processes, and to, well, get some decent sleep at night. As all Standing Trustees know, once it is your name on the checks, it is much more stressful. But Zaharopoulos states it is a good kind of stress and he loves his new job.

His goal is to efficiently and effectively administer Chapter 13 plans. He states he inherited a wonderful staff of 19 employees from Trustee DeHart and wants to inspire and encourage them in working to achieve that same goal.

Zaharopoulos credits three mentors for his success, all of whom happen to be Chapter 13 Trustees: previously mentioned Rebecca Garcia from Oshkosh, Wisconsin; Greg Burrell from Minneapolis, Minnesota; and Isabel Balboa from Cherry Hill, New Jersey.

In turn, Garcia replied: “Having known Jack for more than a decade I’m excited to welcome him to the trustee family. I know he will be a great trustee and make wonderful contributions to the Chapter 13 community in his new role.”

In that same interview published in the NACTT Quarterly, Zaharopoulos was asked, “How did you celebrate the evening you learned you were selected as Trustee?” “It was during the pandemic, so my celebration options were, kind of, limited. I learned of my appointment in the morning but had to wait a few hours for the UST to spread the word. My first call was to my former fellow staff attorney, Rebecca Garcia. That night I went a little crazy and ordered a Papa John’s pepperoni and mushroom pizza, and watched TV,” answered Zaharopoulos.

In his free time, he likes to travel, stay active and watch any sport Wisconsin-related. Although he now lives in Harrisburg, and most recently Chicago, his roots will always be in Wisconsin. He is a serious fan of the Green Bay Packers and the Milwaukee Bucks. He enjoys running and downhill skiing, and is a car enthusiast (favorite: 1965 Shelby Cobra).

He lives with his dog Apollo, who is a 3 year-old rescue with never ending energy and a penchant for finding trouble.