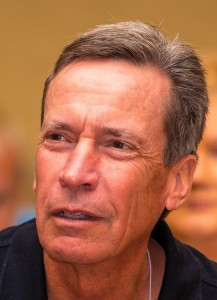 Robert (“Bob”) G. Drummond has been the only standing Chapter 13 Trustee for the District of Montana since 1992. Originally from Montana, Mr. Drummond graduated from Montana State University with a Bachelor of Science degree in Agricultural Business, and received a Juris Doctorate in Law with Honors from the University of Montana.

On August 9, 2019, Drummond was awarded the 2019 Don Torgenrud Professionalism Award. This award is made in memory of Don Torgenrud to a member of the Bankruptcy Section of the State Bar of Montana recognizing an individual who exemplifies the highest standards of professional conduct in their everyday practice. The nomination criteria sets a very high standard for candidates. Nominees should demonstrate ethical and personal conduct and show a commitment to the practice of law that exemplifies the essence of professionalism; possess an unwavering regard for the Rules of Professional Conduct, the State Bar’s Guidelines for Relations Between and Among Lawyers and the State Bar’s Guidelines for Relations Between Lawyers and Clients; actively participate in programs sponsored by the Bankruptcy Section and the State Bar to educate and ensure competence of lawyers; willingly assists other attorneys when confronted with practical and ethical issues in the day to day practice of law; and work in the profession without losing sight of the essential element of public service and the devotion to the public good.

“It is my pleasure to nominate Bob Drummond for the 2019 Don Torgenrud Professionalism Award. Bob exemplifies the best of our profession. He is an example for all attorneys.

Bob plays a unique role in Montana as the sole Chapter 13 Trustee in our state. By focusing his practice on Chapter 13, Bob has become an expert; on Chapter 13 and on bankruptcy generally. Bob has not used his expertise to disadvantage others. To the contrary, he has used his expertise to elevate bankruptcy practice throughout the state. Bob has become a critical resource for all bankruptcy practitioners in Montana. He has given freely of his time, his knowledge, and his advice to assist lawyers in providing the best possible representation of their clients.

Bob demonstrates that bankruptcy involves much more than the Bankruptcy Code and the rules. Bob encounters many of our fellow citizens at some of the most difficult times of their lives. People are bankrupt. They are under extreme financial and emotional pressure. No one files bankruptcy for the joy of the journey. We all know that filing bankruptcy is a difficult decision that weighs heavily on people. As a result, there are occasions when debtors are not at their best. Sometimes they continue to make poor decisions. Sometimes they do things that are simply unexplainable. We have all seen good people make bad decisions in connection with a bankruptcy case.

I have tremendous respect and appreciation for the way Bob interacts with debtors. He builds a relationship with them. He treats them with courtesy and respect. He is a resource and much more. Bob’s calm and professional demeanor conveys a sense of optimism and encouragement that everyone in bankruptcy needs. Bob understands and appreciates that bankruptcy is about people’s lives, their children, and their hopes and dreams. For all debtors, Bob is a point of light. Because of Bob’s efforts, most Chapter 13 cases work out. That is a tremendous accomplishment.

Over the years, I have seen a number of difficult bankruptcies that would not have been successful, but for Bob’s gentle leadership. Throughout these endeavors, Bob has provided an invaluable public service to the Bar as well as to our larger community. We are better because of the professionalism and ethics that Bob demonstrates so well.

I also want to mention that Bob provides a tremendous service to the Bankruptcy Bar and to the state by publishing the Montana Bankruptcy Reporter. This is work that he does after hours when he has completed his work as a bankruptcy trustee. He created a website that keeps track of and publishes Montana bankruptcy court decisions. Bob has made available to us thousands of decisions from Judge Peterson, Judge Kirscher, and Judge Hursch. I am also pleased that Bob has taken on an additional role as a Chapter 12 Trustee for a significant portion of Montana. His active involvement has been a positive development.

We should all thank Bob Drummond for his commitment to our profession. Bob exemplifies the essence of professionalism. As a Bar, we are privileged to count Bob Drummond as one of our members.”

When asked his thoughts on Drummond’s receipt of this award, Ronald Allie, who represents primarily credit unions and is with the Allie Law Firm in Billings, stated: “I have worked with Bob for many years. I cannot think of anyone more deserving of this award. He and his office have always been quick to respond and are willing to assist me in any way, with any issue, in an utmost professional manner, even when I was a young practitioner, who usually needed more guidance at the time.

Not only does Drummond publish the Montana Bankruptcy Reporter, he is the editor of the NACTT Quarterly. He has been a member of NACTT since 1992 and served as its President from 2012 – 2013. He has twice chaired the Montana Bankruptcy Section. He has published numerous articles dealing with Chapter 13 bankruptcy in several national publications. He has been a subscriber and supporter of The Academy d/b/a ConsiderChapter13.org since its inception.